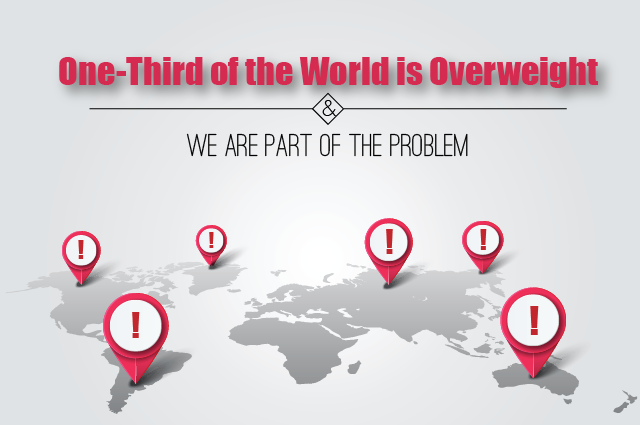 According to an article by CNN, two billion adults and children worldwide — the equivalent of one-third of the world’s population — is overweight, and the United States is among the countries most severely affected.

The article reflected the results of a study published in the New England Journal of Medicine that included 195 countries and territories. The study also notes that an increasing number of people globally are dying from comorbid conditions related to obesity, such as cardiovascular disease.

“People who shrug off weight gain do so at their own risk — risk of cardiovascular disease, diabetes, cancer, and other life-threatening conditions,” says Dr. Christopher Murray, Director of the Institute for Health Metrics and Evaluation at the University of Washington, who worked on the study. “Those half-serious New Year’s resolutions to lose weight should become year-round commitments to lose weight and prevent future weight gain.”

The conclusions of the study do important work in highlighting obesity as a growing concern in global public health as a chronic condition in and of itself; however, researchers also hope to educate the public at large about the link between obesity and other diseases in the hopes that preventative measures and treatment can help people avert early mortality. Almost 70% of deaths related to an elevated BMI in the analysis were due to cardiovascular disease, killing 2.7 million people in 2015, with diabetes being the second leading cause of death.

The study notes that obesity rates rose in all countries studied, irrespective of the country’s income level. “Changes in the food environment and food systems are probably major drivers,” they write. “Increased availability, accessibility, and affordability of energy dense foods, along with intense marketing of such foods, could explain excess energy intake and weight gain among different populations.”

While obesity rates continue to rise in the U.S., with over one-third of our own adult population being overweight or obese, we are luckier than other countries to have access to medical resources that can help curb this epidemic. Now more than ever, the need to begin treating obesity is becoming a public health imperative and medical providers are being called on to lead the charge.

Obesity can be a sensitive topic to broach with patients, but starting the conversation is the first step to helping your patients get on the path to a healthier and better quality life. If you are concerned about your patients’ weight, but aren’t sure how to start the conversation, take a look at our free on-demand webinar “Talking to Patients about Obesity: Opening THAT Conversation” by Dr. Angela Golden a current fellow and past president of the American Association of Nurse Practitioners. You can view that HERE.

And, if you’d like a fun video to share on social media or in patient education forums, take a look at our SMART Weight Loss Tips video below: