Despite the prevalence of obesity, it is often ignored by physicians or addressed as a secondary issue related to one of the many other “real” diseases to which it is linked. Obesity is not only a disease but, in fact, an epidemic. However, rather than being seen as needing urgent attention, treatment is often left to the patient’s discretion and best judgement. It’s rarely, if ever, considered life-threatening and, as a result, rates of obesity continue to rise as do the physical, emotional, and financial costs associated with it.

More than 42 percent of American adults have obesity (BMI >30) and nearly 10 percent have severe obesity (BMI>40). Potentially more disturbing is that nearly 20 percent of youth between the ages of six and 19 have obesity and research suggests that more than half (57 percent) of them will still be obese at the age of 35. The likelihood is even greater for children with severe obesity.

In addition, another one in three people are considered to be overweight. That means that there are fewer people in the U.S. who maintain a healthy weight than there are people with overweight or obesity. This is staggering, and becomes even more shocking when looked at in comparison to past decades, as shown below. We are experiencing an all-time high rate of overweight and obesity and there is no end in sight. 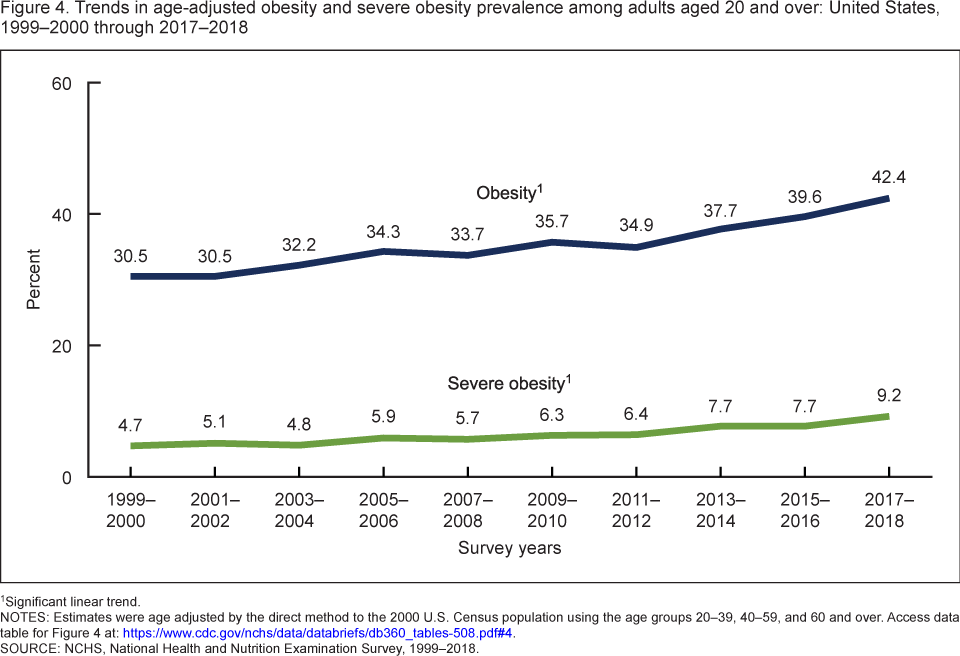 Obesity is not a lack of willpower or simply a “health risk.” It is a biologic, environmental, and behavioral disease and should be taken seriously and treated like the significant condition it is. When considered in conjunction with the many other comorbidities associated with it, such as diabetes, high blood pressure, cardiovascular disease and several others, it is clear that greater emphasis should be placed on weight management across populations and starting at a young age.

In addition to health issues, obesity also is associated with half of the top 10 preventable causes of death, and it can shorten lives by seven or more years. Further, as with many other diseases, the price of obesity creates an economic burden for patients and heath care systems. Surgeries are more complex and thus take more time and more anesthesia — this can lead to greater risk of complications and also increase the likelihood of readmission. All of these issues have financial repercussions and direct costs alone are estimated at around $480 billion for obesity-related chronic diseases. (To learn more about this, download our free white paper, The Price of Obesity: Costs beyond Patient Health.)

We are long overdue for a cultural shift in how society views and treats people with obesity, and the medical community is the natural starting point for change. Direct acknowledgement of obesity as a disease in itself and as a contributor to other diseases should be incorporated in discussions of general and specialized medical treatment. Normalizing the conversation can help both physicians and patients become more comfortable being candid about their concerns, and help reduce the stigma that is too often associated with the condition. Change must happen and it needs to start now!

The implications of obesity go much further beyond patient health than many realize. This brief, free white paper reviews: